The American Bar Association has announced the 2020 theme for Law Day is "Your Vote, Your Voice, Our Democracy. The 19th Amendment at 100":

In 2019-2020, the United States is commemorating the centennial of the transformative constitutional amendment that guaranteed the right of citizens to vote would not be denied or abridged by the United States or any state on account of sex. American women fought for, and won, the vote through their voice and action.

The women’s suffrage movement forever changed America, expanding representative democracy and inspiring other popular movements for constitutional change and reform. Yet, honest reflection on the suffrage movement reveals complexity and tensions over race and class that remain part of the ongoing story of the Nineteenth Amendment and its legacies. 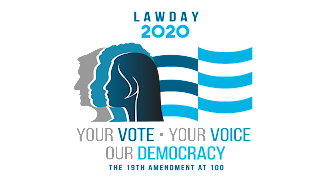 "Each year on Martin Luther King Day, let us not only recall Dr. King, but rededicate ourselves to the Commandments he believed in and sought to live every day: Thou shall love thy God with all thy heart, and thou shall love thy neighbor as thyself. And I just have to believe that all of us -- if all of us, young and old, Republicans and Democrats, do all we can to live up to those Commandments, then we will see the day when Dr. King's dream comes true, and in his words, "All of God's children will be able to sing with new meaning. . . land where my fathers died, land of the pilgrim's pride, from every mountainside, let freedom ring." 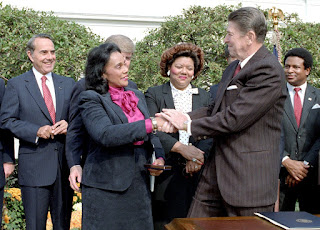 (President Reagan, Coretta Scott King, Bob Dole and others at the signing ceremony for HR 3706 making the birthday of Martin Luther King Jr. a national holiday. 11/2/1983)

At its meeting Monday (January 13, 2020), the Schuyler County legislature voted to ask the state to increase its appropriation for Cornell Cooperative Extension associations to $8 million statewide.

“State funding is needed to ensure that the Cornell Cooperative Extension system can equitably work for all New York residents through increased resources to support rural, suburban, and urban community development needs,” the resolution continued.

Therefore, “the Schuyler County Legislature supports increasing the State appropriation for Cornell Cooperative Extension associations to $8 million, such funds to be distributed directly to the associations through Cornell University as agent for the state as provided by law.”

Currently, New York State law provides for state matching funds for each county or regional extension association, subject to the furnishing of equivalent sums from county appropriations. However, the current funding formula only allows, “fifty cents for each dollar up to the first $100,000 appropriated by such county, and five cents for each dollar in excess of $100,000, subject to annual appropriation by the (state) legislature.”

Cornell Cooperative Extension is a formal collaboration between the National Institute of Food and Agriculture at USDA, New York State, County Governments and the Citizens of the State that has served to apply research-based knowledge from Cornell, New York’s Land Grant University, to the needs of New Yorkers and their communities for over 100 years.

The County of Schuyler is governed by an eight-person legislature, headed by its Chair. Members serve staggered four-year terms. The legislature, in turn, appoints various department heads to oversee the county’s day to day operations, including the county administrator (Tim O’Hearn), county attorney (Steven Getman) and clerk to the legislature (Stacy Husted).

A complete copy of the resolution appears below.

Posted by Steven Getman at 6:43 PM

Posted by Steven Getman at 7:56 AM

Republican Carl Blowers, of Dix, was elected Chair of the Schuyler County Legislature at its annual reorganizational meeting held Thursday. The vote was unanimous among the legislature’s eight members.

In other action, the legislature reappointed Stacy Husted, of Montour Falls as Clerk of the Legislature, Steven Getman, of Watkins Glen, as Schuyler County Attorney and Wesley Roe as Public Defender. Tim O’Hearn continues at County Administrator.

Prior to the voting, County Court Judge Matt Hayden administered the oath of office to newly elected legislators Mark F. Rondinaro (District VII) and Gary L. Gray (District VIII). Blowers, a retired businessman, was first elected to the legislature in 2014 and re-elected in 2018. He is active in a number of organizations, including: the Watkins Glen Area Chamber of Commerce, the Montour Falls Library, the Arnot Art Museum, the Food Bank of the Southern Tier, the Erie Canal Way Heritage Fund, the United Way of Schuyler County and Catholic Charities of Chemung and Schuyler counties. He has served as a member of the Regional Board of Trustees of Corning Community College as well as its Chairman.

Blowers replaces outgoing chair Dennis Fagan, who did not seek re-election to the legislature.

The County of Schuyler is governed by an eight-person legislature, headed by its Chair. Members serve staggered four-year terms. The legislature, in turn, appoints various department heads to oversee the county’s day to day operations, including the county administrator, public defender, county attorney and clerk to the legislature.