The Town of Romulus has defeated a lawsuit by a local corporation that sought to reduce from nearly $300,000 total to zero the taxable value of several private properties that the corporation owns.

On Tuesday (May 19), Romulus Town attorney Steven Getman asked the court to dismiss the case. Arguing for dismissal, Getman stated that the law required Lakeshore Landing to submit appraisals or other factual data to show that the assessments were excessive. In this case, Getman said, the association had failed to do so. Furthermore, Getman noted, various legal factors demonstrated that the properties had a value to Lakeshore Landing, including its right to borrow against the properties or sell them outright.

Romulus Town Supervisor David Kaiser said he was pleased with the court’s decision, noting that, if Lakeshore Landing had succeeded, the town’s other taxpayers would have been required to make up the lost revenue.

The Town Board of the Town of Romulus will hold a public hearing on the following proposed Local Law at the Town Office Building, 1435 Prospect Street, Willard, New York 14588 at 7:30 p.m. on the 17 day of June, 2015: Proposed Local Law No. A Of The Year 2015: “A local law to eliminate the elected position of Superintendent of Highways and replace it with an appointed position of Superintendent of Highways.”

If passed, this local law shall be subject to mandatory referendum at the next regularly scheduled General Election on November 3, 2015.

The complete text of the proposed local law is available from the Office of the Town Clerk, Town of Romulus, 1435 Prospect Street, Willard, New York 14588, during normal business hours and at the town’s website. 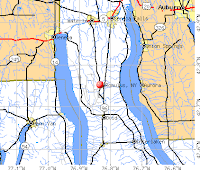 1. The purpose of this local law is to amend the Zoning Ordinance for the Town of Romulus, Seneca County, New York, to better reflect existing and proposed uses of land upon the portions of the former Seneca Army Depot that are located within the Town of Romulus.

2. Zoning text and map changes: Portions of the existing Energy Development district (3,186 acres) proposed to be rezoned to a new Warehouse, Industrial, Transportation, Energy (WITE) district; 342 acres proposed to be rezoned to Agricultural, which permits residences and other uses. Zoning text changes include new and modified definitions and special use permit criteria for uses permitted in the new WITE zoning district and in the existing zoning districts within the Depot (IW [Industrial Warehouse] and IG [Institutional Governmental].) An Environmental Restrictions Overlay District delineates a portion of the former Depot where land uses are restricted as a condition of completed environmental remediation. The Environmental Restrictions Overlay District coincides with the boundaries of the existing Industrial/ Warehouse District.

3. This Local Law shall become effective upon filing with the Secretary of State of the State of New York, as required by the Municipal Home Rule Law. This law supersedes the Town of Romulus Land Use Ordinance, adopted 12/20/06 as amended from time to time.

The complete text of the adopted local law is available from the Office of the Town Clerk, Town of Romulus, 1435 Prospect Street, Willard, New York 14588, during normal business hours and at the town’s website.
Posted by Steven Getman at 8:49 AM

The state Department of Environmental Conservation released a final version of the roughly 2,000-page document, known as the Supplemental Generic Environmental Impact Statement or SGEIS, just after 4 p.m.

Now, DEC Commissioner Joseph Martens must wait at least 10 days before issuing a legally binding "findings statement," which he has said will formally put the state's fracking ban into place.

The complete report can be found here.
Posted by Steven Getman at 2:07 PM

May 1: Law Day in America celebrates the rule of law

Every year, our nation sets aside Law Day, May 1, to remind us of our of our great heritage of liberty, justice, and equality under law.

This year, Law Day commemorates the 800th anniversary of Magna Carta, the “Great Charter of Liberties,” and calls upon upon each of us to "rededicate ourselves to advancing the principle of rule of law here and abroad."

Posted by Steven Getman at 7:16 AM