Montour Falls, NY— The Schuyler County chapter of S.C.O.P.E. (the Shooters Committee On Political Education) has released ratings on the four candidates for Schuyler County Court Judge and Republican Steven Getman was the clear winner.

Getman, currently the Schuyler County Attorney, received a grade of “A,” based on responses to a written questionnaire and responses to questions presented to all four candidates at a recently held S.C.O.P.E. public forum at the Montour Falls Moose Club.

Getman scored well ahead of his three rivals: Democrat Matt Hayden scored a “B Minus,” while third-party candidates Dan Fitzsimmons and Jessica Saks each came in with a “C minus” for their grades.

An attorney since 1992, Getman has practiced in each of the courts over which the County Court Judge presides: County Criminal, Civil, Family and Surrogate’s. He has also handled dozens of criminal and civil appeals in the New York State Supreme Court Appellate Division. As Schuyler County Attorney, Getman is the chief legal advisor to approximately 250 county employees, including the County Administrator and County Legislature. He and his staff have handled thousands of cases, prosecuted and defended civil actions, appeared in numerous courts, and drafted legislation. In addition, his office prosecutes family court cases involving child abuse and neglect, juvenile delinquency and child support violations. Beyond his service as an attorney, Getman has taught criminal justice and constitutional law as an Adjunct Instructor at Keuka College for the past eight years.

S.C.O.P.E. is a 501 (c) 4 statewide organization since 1965 dedicated to preserving the 2nd Amendment rights of the citizens of New York State through public education and promoting voter participation.

In addition, to the Republican Party, Getman has been cross-endorsed by the New York State Libertarian Party and will appear on that ballot line as well. The general election is scheduled for November 5.

According to the appellate court decision “Matter of Lawson O,” dated Thursday (October 17), the Schuyler County Department of Social Services (DSS) had charged the man in family court with abuse and neglect following receipt of a child protective services hotline report in January 2016.     According to testimony before the family court, the daughter had been discovered acting out sexually and then disclosed to a family member that her father had been having oral sexual contact with her.

Following a fact-finding hearing in 2017, Family Court Judge Dennis Morris determined that the girl's out-of-court statements regarding the alleged sexual abuse were sufficiently corroborated and that the father had abused the daughter, derivatively abused her two siblings and neglected all three of his children.    Therefore, the family court entered an order of protection, directing the man have no contact with the children, other than supervised visitation and communications reviewed and approved in advance by DSS, and directing him to enter sex offender treatment.

The father, through attorney Dana Salazar, appealed, alleging that the family court's finding of abuse was not adequately established by the evidence.

The DSS was represented on appeal by Schuyler County Attorney Steven Getman.  Getman asked the appellate court to uphold the family court findings.      Getman argued that that the girl had demonstrated an “age-inappropriate knowledge of sexual activity" through her behaviors prior to the disclosure, supporting her description of abuse.  He also cited evidence of prior sexual abuse allegations against the father involving other family members, and the father’s admissions that he spent approximately eight months in jail stemming from an earlier sexual abuse charge related to a niece. Getman also pointed out the father had admitted on the stand to lying to law enforcement officials, thereby showing a propensity for dishonesty.

Following submission of the party’s papers and a review of the record, the appellate court agreed with DSS, finding “a sound and substantial basis exist[ed] in the record to support Family Court's finding that respondent abused the daughter.”   Therefore, it upheld the Family Court order in all respects.

The court’s decision does not name the father or the children, using pseudonyms to protect the children’s privacy.

The father has approximately thirty days to seek leave to appeal the decision to the New York State Court of Appeals.

Both agencies were assisted in the investigation of the case by members of the Schuyler County Sheriff’s department.

A complete copy of the decision is available here. 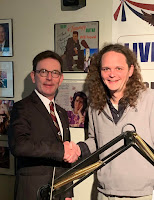 We hope you could tune in to listen!

Posted by Steven Getman at 8:30 AM

In honor of October's National Bullying Prevention Month, STOMP Out Bullying™, the leading national nonprofit dedicated to changing the culture for all students, calls on the nation to support their mission by raising awareness around the need to develop a society focused on kindness and inclusivity.

"We have always been an organization dedicated to spreading kindness and preventing bullying and cyberbullying. However, this year, we are encouraging communities, youth, students and society to use their voice to make bullying history," said Ross Ellis, CEO and Founder of STOMP Out Bullying™. "This October, we mark 14 years as an organization. I never want to see another child in pain," added Ms. Ellis. "And I never want to hear the words, 'I want to die.'

Beginning Tuesday, 17-year-old criminal offenders will no longer be automatically sent into to the adult criminal justice system in New York.

The second phase of the Raise the Age law went into effect at midnight; it applies specifically to 17-year-old offenders.