PLEASE TAKE NOTICE that a public hearing shall be held upon the following proposed Local Law on March 12, 2018 at 6:30 p.m. in the County Office Building, 105 Ninth Street, Watkins Glen, NY:

Local Law B of the year 2018: A Local Law declaring the opioid epidemic and its effects on the County a public nuisance and establishing a cost recovery procedure. 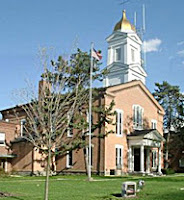 A. The opioid epidemic is sweeping the country. Indeed, addiction to and abuse of opioids is one of the greatest challenges facing Schuyler County, New York (the “County”). A cause of this increasing crisis is the overabundance of prescription opioids. Large amounts of prescription opioids were sold, distributed, and prescribed in the County over the past several years, a practice that continues today. The selling, distributing, and prescribing of large amounts of opioids in our community has created a public health and safety hazard affecting the residents of the County. This crisis has devastated families, wreaked havoc on our economy, and produced a generation of narcotic dependence. As a result of the opioid epidemic, costs related to healthcare, family and social services, criminal justice, addiction and rehabilitation, and many other areas have significantly increased. Many of these costs are paid by the County.

The complete text of the proposed local law can be found here.
Posted by Steven Getman at 12:00 AM

Schuyler County will hold a public hearing on March 12 to review a proposed local law declaring the opioid epidemic and its effects on the County a public nuisance.

According to Schuyler County Attorney Steven Getman, the draft local law is the next step in the County’s lawsuit against the manufacturers and distributors of opioid pain killers.

“The purpose and intent of this legislation is to allow the County to recover costs related to healthcare, family and social services, criminal justice, addiction and rehabilitation, and many other areas have significantly increased,” Getman explained.   “Many of these costs are paid by the County.”

Upon passage, the local law would be followed by the filing of a lawsuit against the manufacturers and distributers of prescription opiates for damages to the County arising out of the fraudulent and negligent marketing and distribution of opiates in and to the County

The County Legislature voted in August to retain the firm of Napoli Shkolnik, PLLC to file that lawsuit on their behalf.  Napoli Shkolnik will work with Getman, as special counsel.

“Over the past few years, despite its small population, Schuyler County has seen an uptick in opioid and heroin use and overdose,” Getman said.   “To date, County officials have expended significant resources to help its residents battle opioid addiction and prevent further deaths. The lawsuit will seek to reimburse the County for its expenses related to the opioid crisis as well as provide the County with financial assistance to continue this battle.”

According to County Administrator Tim O’Hearn, the lawsuit will be filed at no risk to the County, as Napoli Shkolnik will work on contingency basis that will cover all costs associated with the lawsuit.

“By voting to go forward with local law, the County Legislature hopes to lessen the burden to taxpayers and seeks to hold manufacturers and distributors responsible for their role in the opioid epidemic,” O’Hearn said.
“These drug companies have poisoned our communities and polluted our children” says Paul Napoli, of counsel for Napoli Shkolnik. Paul Napoli leads the charge with Hunter Shkolnik against drug companies nationwide.

“The painkiller overdose epidemic is a classic case of putting profits before people,” he said. “Many opioid manufacturers were so intent on selling as much product as possible that they either turned a blind eye towards, or intentionally buried, reports that these drugs were highly addictive and potentially deadly.”

Napoli added that “our door is open” to other New York municipalities who are also fed up with the overdose epidemic, and that Napoli Law has the firepower to go toe-to-toe with the big pharma lawyers.

Napoli has dedicated much of his career to mass tort litigation. He has fought on behalf of 9/11 injury victims at both the statehouse and the courthouse, and he and his team also took on the big energy companies which contaminated much of Long Island’s drinking water supply with dangerously high levels of methyl tertiary butyl ether.

The Public Hearing on the proposed local law will be held in the Legislative Chambers of the Schuyler County Courthouse, 105 Ninth Street, Watkins Glen, New York on Monday, March 12, 2018 at 6:30 pm.   The public is invited and encouraged to attend and voice their concerns regarding the opioid epidemic and the costs to Schuyler County and its communities.

These actions are intended support law enforcement in their efforts to stop the spread of lethal drugs in New York State.

In recent years, fentanyl analogs have been increasingly found pressed into pill form to resemble name-brand prescription opioids, and in heroin and cocaine being sold in New York State. Compared to 30 milligrams of heroin, just three milligrams of fentanyl can be fatal.

There is currently a loophole in state law that has left 11 dangerous fentanyl analogs off New York's controlled substances schedule.

Posted by Steven Getman at 5:51 AM

The Human Trafficking Prosecution Unit of the US Department of Justice, Civil Rights Division and the National Legal Aid and Defender Association are presenting a free webinar, Combatting Human Trafficking Through Collaboration, on Feb. 21, 2018 from 2:00-3:30 EST.

The webinar will address "types of legal services survivors of human trafficking need; how to identify when civil or criminal clients may be victims of trafficking; successful models for collaborating with law enforcement while maintaining a victim-centered approach; and opportunities for working with the Civil Rights Division to fight against human trafficking."

Watkins Glen—Schuyler County officials will be hosting a rabies clinic on February 6 at the Shared Services Building, 910 S. Decatur Street, Watkins Glen, New York. The clinic will run from 6:00 pm to 8:00 pm in the evening. 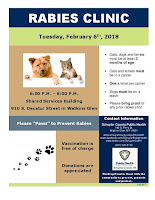 Vaccination is free of charge, but donations are appreciated.

Rabies is a serious virus of all mammals with no known cure. It causes neurological degeneration that ultimately leads to the death of the infected person or animal. Luckily, Rabies can be prevented with vaccination, and New York State requires by law the compulsory vaccination of all domestic dogs, cats and ferrets for the safety of the public. Compliance with Rabies Vaccination Laws is monitored by the New York State Department Of Health.