Some of the biggest changes are:

• If a tenant is ordered evicted, instead of 72 hours, the court order must give the tenant 14 days.
• If the tenant can pay up, in full, at any time during the eviction process, the landlord has to accept.
• Landlords who unlawfully evict tenants can now be fined and charged with a misdemeanor.
• Landlords cannot use a tenant’s history of evictions or judgments from landlords to refuse to rent to them.
• Landlords have to give written notice when they start eviction proceedings. They cannot start court proceedings for at least 10 days after the tenant is served.
• If the tenant shows up to court and asks for an adjournment, the judge has to grant it and the minimum is two weeks.

For more on the new laws, click here.
Posted by Steven Getman at 12:00 AM


Watkins Glen, NY (July 16)--An Elmira man was given a 60-day jail sentence for not paying past-due child support and violating his probation, following an appearance in Schuyler County Family Court on Tuesday (July 16, 2019).

According to County Attorney Steven Getman, the respondent was found in willful violation of a prior court order because he failed to pay over $2500.00 in back support for his two children and absconded from probation supervision.

At Tuesday’s court appearance, Getman noted that the respondent had been placed on probation in 2018 for prior violations of the court’s support orders.    However, Getman said, the respondent continued to miss payments and then absconded to California, causing a warrant to be issued for his arrest.

The last payment was made in September, 2018, Getman said.

Based on the evidence, Getman argued, the respondent should be sentenced to jail.

The respondent was represented by Schuyler County Assistant Public Defender Mark Raniewicz. Raniewicz asked the court to consider releasing his client on a suspended judgment, giving him time to make payments.

After hearing from the attorneys, and the respondent, Acting Schuyler County Family Court Judge Joseph Cassidy determined that the respondent should be incarcerated.  Therefore, he sentenced the respondent to sixty days in jail, with the opportunity to “purge” the sentence if he paid at least $1000.00 towards the back child support.      Cassidy then ordered the man immediately taken into custody by court security.

Getman said he was pleased with the court’s decision.

“This jail sentence sends a message that will hopefully resonate,” Getman said. “Under New York State law, parents who willfully fail to obey court orders of child support can be sentenced to up to six months for contempt of court.”

“Parents who refuse to support their children can, and will, be punished when appropriate.”

The county attorney’s office represents the Department of Social Services and Probation Department in prosecuting child support cases brought in the family court by those agencies.  In addition, the office provides support collection services for eligible custodial parents seeking assistance in establishing and enforcing orders for child support.

The county attorney’s office was assisted in the prosecution and presentation of the case by employees of the county’s child support enforcement unit and county probation department.

The man’s name was not released to protect the privacy of his children and family.

“As your County Clerk, I've seen Steve's work up close for years. He is always level-headed and focused on achieving a fair and just result. He is knowledgeable, understanding and fair in all of his dealings with county employees, elected officials and the public. Steve is right for this position in every way.”

“Theresa is one of Schuyler County’s finest public servants and it’s an honor to have her support in this important election,” said Getman. 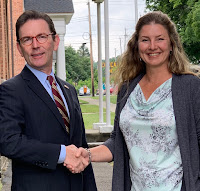 Getman and Philbin have worked together extensively to help residents of Schuyler County. For example, earlier this year, they teamed up to help warn residents about a possible deed scam involving a company that sells public information to homeowners about their own properties at inflated costs.

Philbin also noted that, “Anyone who cares about Gun Rights should support Steven Getman. He has been extremely helpful to me by providing advice and counsel related to the Second Amendment and he is a lifelong supporter of our Right to Bear Arms.”

Getman, a resident of Watkins Glen, has been the Schuyler County Attorney since 2015. Prior to that, he served as the assistant county attorney. He has practiced law since 1992, in areas including criminal law, family law, and municipal government. He has helped teach our next generation as an Adjunct Instructor at Keuka College, leading courses focused on criminal justice and constitutional law.

In late June, Getman also earned the endorsement and nomination of the full Schuyler County Republican Committee. Getman will be the only county court judge candidate to appear on the Republican line on this November’s ballot.

He has been cross-endorsed by the Libertarian Party as well.

The General Election is slated for Tuesday, November 5.

Schuyler County officials say they all have agreed to work toward an agreement to keep their animal control partnership in place with the Humane Society of Schuyler County.

This came after several towns – Montour, Dix, Hector, Catharine, Reading and Tyrone – had all voted to cancel their contract with the Humane Society and create a new agreement with a different animal control entity.

Read the full statement from the Humane Society and the towns here.
Posted by Steven Getman at 12:00 AM