The Schuyler County Chapter of SCOPE or the Shooters Committee on Political Education will hold a “Meet the Candidates Night” next week.

As part of its mission, S.C.O.P.E. is inviting candidates for countywide (local/state/federal) office to attend its quarterly meeting on October 6th at the Montour Falls Moose Lodge as a “Meet the Candidates Night.” Candidates will be given the opportunity to make a few brief remarks and answer questions from the membership. This will not be a debate but, rather, a chance for interested persons to interact with candidates directly.

Members of the public are invited and encouraged to attend.

Posted by Steven Getman at 8:51 AM

Oswego County man jailed for failure to pay over $8,000 in back child support

An Oswego County man was given a 30-day jail sentence for not paying over $8,000 in past-due child support, following an appearance in Schuyler County Family Court on Tuesday (September 13, 2022).

According to the office of Schuyler County Attorney Steven Getman, the respondent was sentenced for a willful failure to obey prior court orders directing him to pay at least $175.00 per week for support of his three children. This failure, court records showed, dated back approximately ten years, and had already resulted in sanctions that included civil judgments, probation sentences, substance abuse treatment and a suspended jail sentences. However, despite the court’s past efforts to avoid jail, the respondent continued to miss court-ordered payments and owed $8,260.00 in back support. 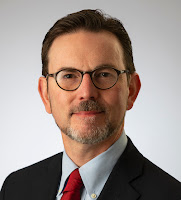 Assistant County Attorney Vinton Stevens presented the case for the prosecution. In court, Stevens argued that the respondent was still not voluntarily making payments and had even quit his job recently. The respondent was now also facing a new child support violation charge, Stevens noted.

Based on the evidence, Stevens said the respondent should finally be incarcerated.

The respondent was represented by Ithaca attorney Francisco Berry. Berry argued that the respondent should not be jailed, but instead allowed to attend a faith-based substance abuse program.

Getman said he was satisfied with the court’s decision. 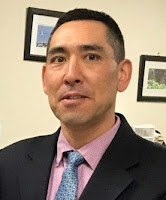 “Under New York State law, parents who willfully fail to obey court orders of child support can be sentenced to up to six months for contempt of court,” Getman noted. “Here, the respondent was given many chances to do right by his children, but repeatedly failed to do so.”

“Children deserve their parents’ support, financial and otherwise. Those who willfully fail to consistently support their children can, and will, be punished when appropriate.”

The County Attorney’s Office was assisted in the prosecution and presentation of the case by employees of the County’s Child Support Enforcement Unit. 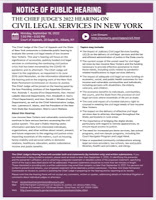 • The impact of Judiciary Civil Legal Services funding (JCLS) on the delivery of civil legal services and the fair and efficient administration of justice in the State courts.
• The current scope of the unmet need for civil legal services by low-income New Yorkers and the funding necessary to provide effective assistance to meet those needs, including costs related to pandemic-
• related modifications to legal services delivery. The impact of adequate civil legal services funding on economic, social, and public health outcomes for low- income and vulnerable communities and individuals, including persons with disabilities, the elderly, veterans, and children.
• The economic benefits to individuals, communities, the courts, and the State from the provision of civil legal services where essentials of life are at stake.
• The cost and impact of a funded statutory right to counsel in meeting the civil legal needs of low-income New Yorkers.
• The impact on the delivery of effective civil legal services due to attorney shortages throughout the State, particularly in rural areas.
• The importance of bridging the digital divide, particularly with regard to remote appearances, to ensure equal access to justice.
• The need for increased pro bono services, law school programs, and non-lawyer programs, including the Court Navigator Program and Legal Hand.
• New or expanded community collaborations among legal services providers, law schools, law and public libraries, health care providers, and clergy.

Live Stream the hearing here.
Posted by Steven Getman at 1:00 AM

The Association of Prosecuting Attorneys, in partnership with the Animal Legal Defense Fund, will host the 11th National Animal Cruelty Prosecution Conference on December 13-15, 2022 in Nashville, Tennessee.

The goal of this training is to provide prosecutors, law enforcement, and others with the requisite skills to strengthen links between the criminal justice system and the community by protecting our most vulnerable victims and to enhance prosecutors' ability to successfully identify and prosecute animal cruelty and animal fighting cases.

The conference is intended for prosecutors, law enforcement and animal control officers, veterinarians and related disciplines involved in the prosecution of animal cruelty crimes.

For more on the conference, including how to register, click here.

A lack of juvenile detention facilities for teenagers charged with violent crimes under New York’s “Raise the Age” (RTA) law has reached a crisis level, often forcing counties to release the accused into the public and placing communities and children at risk.

That’s the finding of a statewide group of county officials and probation administrators, in a letter sent to Gov. Kathy Hochul on Monday (August 8).

As noted in the letter, the 2018 RTA law created a new “adolescent offender” status for 16-and 17-year-olds who commit a felony-level crime. Under the law, instead of being tried as adults and placed in jails, the most serious offenders could be sent to specialized secure detention facilities.

However, despite mandating that counties operate or have access to those facilities (which never existed before RTA), the scarcity of these state-certified facilities has led to “severely negative consequences,” for the public and the counties who administer the law. 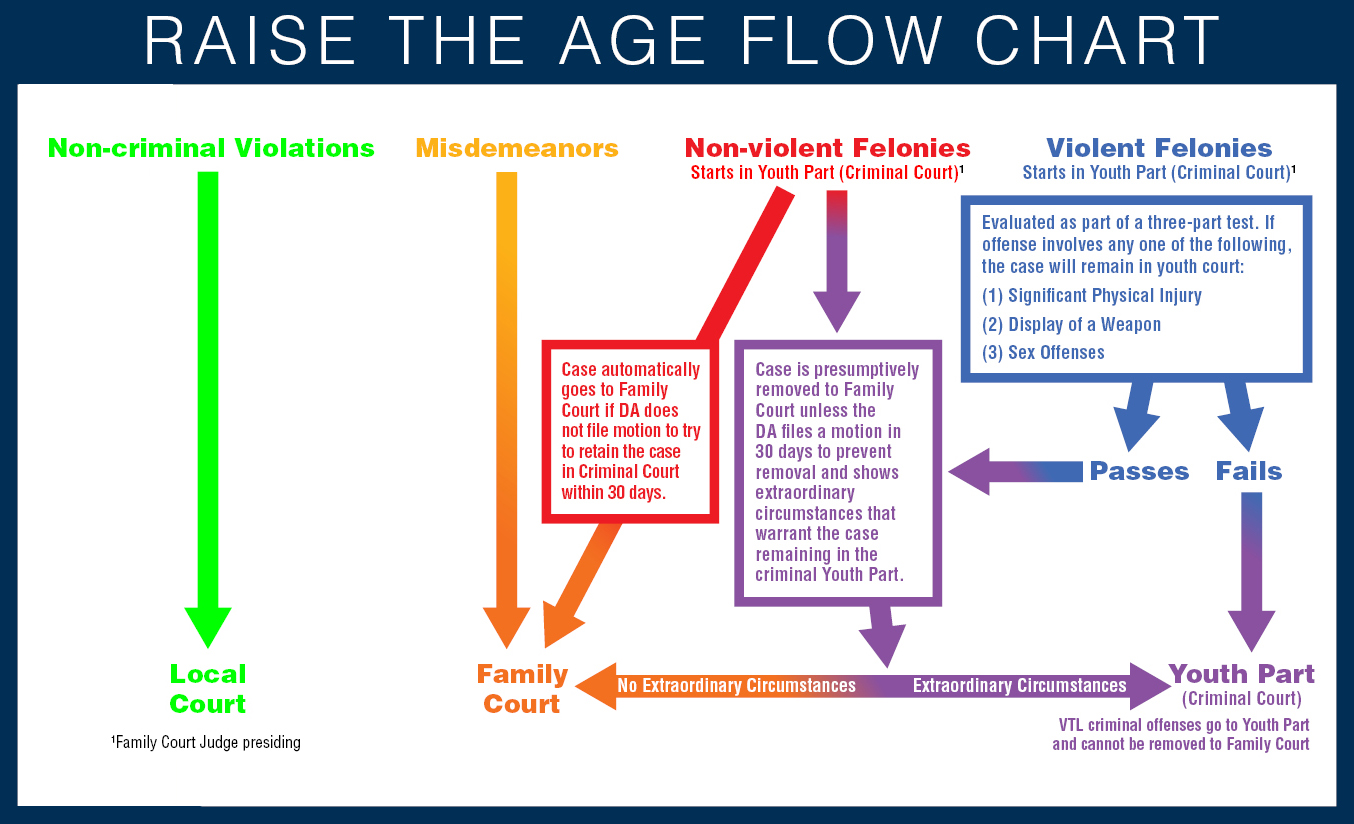 “Today, counties either have to transport youth far from home while they await trial, or the youth remains free in their community after having been charged with serious crimes that include murder, attempted murder, rape, and robbery—many of which included the use of guns,” the letter notes. “Both scenarios, which are common occurrences in many jurisdictions, are a direct result of the state not being fully prepared for this hastily implemented legislation and its mandate that counties be solely responsible for detention.”

“When secure detention space is not available, the Adolescent Offender, which is often a high-risk individual alleged to have a committed a serious and violent crime, is released to be supervised by the probation department.”

To help resolve this crisis, the county officials are urging Hochul to transition some of the closed Department of Correctional and Community Supervision facilities to accommodate the lack of specialized secure detention beds.

The county representatives also suggested that the state allow the Finger Lakes Consortium to open a specialized secure detention facility.

That consortium, created via a 2018 Intermunicipal Agreement, drafted by Schuyler County Attorney Steven Getman, looks to establish a not-for-profit local development corporation to develop and operate a joint detention facility under RTA. Counties who have joined—or are looking to join—the consortium are Allegany, Chemung, Cortland, Livingston, Cattaraugus, Wayne, Schuyler, Steuben, Tioga, Tompkins and Yates. The counties contracted with John Treahy, of Treahy and Associates Consultation Services, an organization experienced in juvenile justice and child welfare issues, job coaching and staff training. v RTA was intended as a shift from punishing to rehabilitating teens charged with crimes. While in custody, the suspects would be eligible for a variety of case services and programs to divert them from offending again and give them access to treatment for addiction or other problems.

The “Raise the Age NY Campaign” believes the law will be more effective in preventing re-offenses. They cite a U.S. Center for Disease Control study that found youth who are tried in the adult criminal justice system are 34 percent more likely to commit future crimes than those who remain in the youth justice system.

A complete copy of the letter to Hochul, signed by representatives of the New York State Association of Counties, Council of Probation Administrators and County Executives’ Association can be found here

The event will be held between 9:30am - 2:30pm at the county’s Human Services Complex, Conference Room #120, in Montour Falls.

A Schuyler County man was given a 90-day jail sentence for not paying over $11,000 in past-due child support, following an appearance in Schuyler County Family Court on Tuesday (July 19, 2022).

(T)he man was found in willful violation of a prior court order because he failed to pay $11,735.85 in court-ordered support for the benefit of his two children. This failure to pay stretched back to at least July 2018, and had already resulted in numerous judgments, a probation sentence and a prior order of incarceration, court records showed. The man is also facing a new child support violation proceeding, that can also result in up to an additional six months of incarceration. Most recently the respondent was picked up on a child support warrant in Chemung County on Monday (July 18, 2022).

Assistant County Attorney Vinton Stevens presented the violation case for the County Attorney’s office. At Wednesday’s court appearance, Stevens advised the court that the respondent had not made any payments toward the amount due since December 2021, although the man had been employed and paying up until that time.

Based on the evidence, Stevens argued that the respondent should be sentenced to 90 days in jail, due to the man’s failure to meet the conditions of a previously imposed suspended sentence.