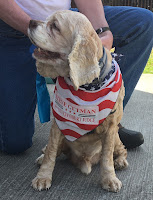 National Dog Day celebrates all breeds, pure and mixed and serves to help galvanize the public to recognize the number of dogs that need to be rescued each year, either from public shelters, rescues and pure breed rescues.

National Dog Day honors family dogs and dogs that work selflessly to save lives, keep us safe and bring comfort.

Dogs put their lives on the line every day - for their law enforcement partner, for their blind companion, for the disabled, for our freedom and safety by detecting bombs and drugs and pulling victims of tragedy from wreckage.

Posted by Steven Getman at 5:14 AM

New York state officials have enacted three new pieces of legislation that aim to expand protections for victims of abuse and domestic violence.

These measures are intended to: 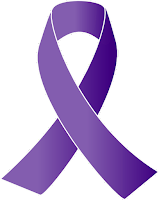 • broaden the definition of domestic violence to include forms of economic abuse, including identity theft;
• give victims the choice to vote by mail-in ballot, even if they remain within the county where they are registered to vote; and
• allow victims to report abuse to any law enforcement agency in New York State, regardless of where the violence originally took place.

Under the new law, firefighters and other emergency personnel will be allowed to remove pets from unattended cars under conditions that endanger the animals' health or well-being, such as extreme temperatures.

The law goes into effect immediately. 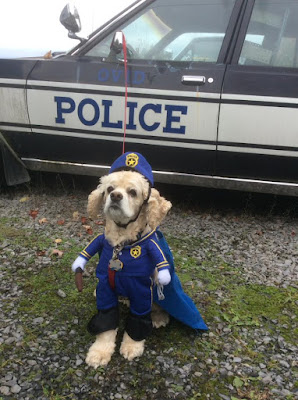 A Savona man was remanded to jail on a Family Court warrant, tied to his failure to pay child support, on Wednesday (August 7, 2019).

According to County Attorney Steven Getman, the respondent was previously found in willful violation of an existing court order because he failed to pay $475.00 in back child support for his two children, together with an additional $344.00 in judgments.  According to court records, the respondent was scheduled to appear for sentencing on the violation July 16, but failed to do so, resulting in Family Court Judge Joseph Cassidy issuing a warrant for his arrest.
The respondent was later located in Steuben County, after the Schuyler County Attorney’s office determined he was on probation in that county for an unrelated criminal offense, Getman noted.    He was taken into custody in Steuben County and transferred to Schuyler County for further proceedings on the warrant.

The respondent was arraigned before Montour Falls Village Justice Donald Spaccio, who continued bail at $475.00 and remanded the respondent to jail pending the next Family Court date.

Getman represented the petitioner at the court appearance.   The respondent was represented by Schuyler County Assistant Public Defender Valerie Gardner.

“Under New York State law, parents who willfully fail to obey court orders of child support can be sentenced to up to six months for contempt of court,” Getman said.  “Furthermore, support violators who do not appear in court as ordered, can be subject to a warrant of arrest.”

The county attorney’s office represents the Department of Social Services and Probation Department in prosecuting child support cases brought in the family court by those agencies.  In addition, the office provides support collection services for eligible custodial parents seeking assistance in establishing and enforcing orders for child support.

The man’s name was not released to protect the privacy of his children and family.
Posted by Steven Getman at 2:40 PM

Article: The Shocking Lack of Lawyers in Rural America

The Atlantic writes that "while cities are trying to reform their criminal-justice systems, smaller, more far-flung locales are struggling to provide basic services."

While it is well known that public defenders’ caseloads are untenably high in jurisdictions nationwide, prompting lawsuits, the situation is particularly dire in largely rural states such as Louisiana. These so-called legal deserts may have only one or two defense attorneys, who are usually near retirement with no one to take their place. In Mississippi, defendants routinely wait up to a year to even get assigned counsel. In Minnesota, counties can span hundreds of miles and court may sit only twice a month, requiring staff and lawyers to drive an hour each way.

Meanwhile,several counties in New York, including Schuyler County, "have been implementing the historic reforms to public criminal defense set forth in the 2014 Settlement Agreement in Hurrell-Harring v. The State of New York (Settlement) which received court approval in March 2015."

By ensuring counsel at every arraignment, utilizing uniform criteria and procedures for assessing financial eligibility for assignment of counsel, and taking steps to reduce attorney workloads, the Hurrell-Harring counties and providers have worked tirelessly for four years with the aid of $23.8 million in State funds annually to improve the quality of representation provided in criminal cases.

For more on Schuyler County's work to improve the quality of legal services for indigent defendants, click here.