The state has proposed legislation that will change how Off-Track Betting (OTB) is overseen and operated. Under the proposed bill introduced by state Sen. Tim Kennedy, instead of each member county having its own representative, membership would be distributed by population.

"And Schuyler County would be forced to share a single representative with Cayuga, Chautauqua, Genesee, Livingston and Seneca Counties," said County Attorney Steven Getman. "Larger, western counties, such as Monroe and Erie, would gain representation on the board."

While the new legislation is noted to help address prior problems, officials question if shifting the power to fewer areas of the state will actually accomplish those goals.

"Schuyler County, through its representation on the OTB board of directors, has been very vocal in trying to unravel these alleged deficiencies in the current OTB operations and this legislation would, paradoxically, weaken its voice in OTB governance," said Getman. "Had this legislation been in effect during the past several years, Schuyler County's ability to challenge these alleged deficiencies would likely have been seriously curtailed."

For more information on conducting public meetings during this period, click here.

Romance scams in 2021: Fraudsters to the left of you, fakers to the right

Love happens year-round, not only on Valentine’s Day. Unfortunately, romance scams are the same. So, along with sharing (or not) some chocolate, make Valentine’s Day a time to share with people you care about some ways to spot and avoid romance scams. Because, according to a new FTC report, people sent $547 million to online romance scammers last year.

How can you avoid a romance scam?

If someone appears on your social media and rushes you to start a friendship or romance, slow down.
Don’t send a reload, prepaid, or gift card; don’t wire money; and don’t send cryptocurrency to someone you met online.
If you suspect a romance scam, cut off contact. Tell the online app or social media platform right away, and then tell the FTC at ReportFraud.ftc.gov.

A monthly update, prepared for the Schuyler County Chapter of S.C.O.P.E. NY, a statewide 501(c)4 organization dedicated to preserving the 2nd Amendment rights for the residents of New York State. For a complete PDF copy of this month's update, click here. 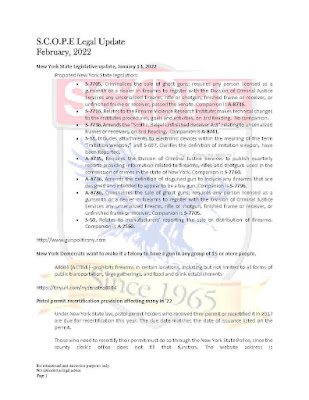 Sounding off at a state budget hearing, several lawmakers said the New York law that raised the age of criminal responsibility to 18 has been implemented with inadequate access to secure housing for offenders and may be a factor in the spread of gang violence.

The Raise the Age law was intended to keep young lawbreakers out of adult courts and prisons and provide them with programming so they won’t end up being mired in lives of crime.

Sen. Tom O’Mara, R-Big Flats, the ranking member of the Senate Finance Committee, said there are indications from law enforcement officials that criminals have been enlisting 16- and 17-year-old juveniles in their schemes because the youths face minimal legal consequences.

Posted by Steven Getman at 7:44 AM