In the 2022 Annual Report of its activities for 2021, released March 3, the New York State Commission on Judicial Conduct reported the following: 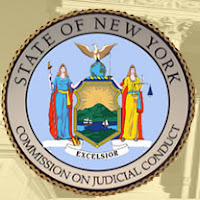 • 1,938 new complaints were received and processed.
• 375 preliminary inquiries were conducted.
• 302 full-fledged investigations were undertaken: 125 new ones and 177 carried forward from 2020.
• 13 judges resigned and publicly agreed never to return to judicial office.
• 10 other judges resigned while complaints were pending, where it had not been determined permanent departure from office was warranted or appropriate.
• 4 judges were publicly censured or admonished.
• 20 judges were issued confidential cautionary letters.
• 191 matters were pending at year’s end.

The New York State Commission on Judicial Conduct is the independent state agency that reviews complaints of ethical misconduct against the 3,500 judges and justices of the State Unified Court System and, where appropriate, renders public disciplinary Determinations.

The 2022 annual report is available here.