Three opioid distributors to pay up to $546,000 in settlement with Schuyler County

Three major drug distributors will pay Schuyler County up to $546,000 to settle claims they contributed to the ongoing opioid crisis in that county, under a resolution approved by the Schuyler County Legislature at its October monthly meeting.

According to the resolution, distributors McKesson Corporation, Cardinal Health Inc. and Amerisource Bergen Drug Corporation all agreed to the settlement with the county in exchange for being released from a pending lawsuit filed by the county, as well as later claims brought by the New York State Attorney General’s office.

The agreement calls for the three distributors to pay the county over eighteen annual installments, with payments expected to begin in 2022, Getman said.

According to Getman, the settlement funds can be used for a variety of purposes.

The settlement also requires the distributors to implement a process for collecting and analyzing data about opioid sales, Getman noted. It will involve the creation by the companies of a data clearinghouse to establish pharmacy-specific opioid shipment limits that each distributor must follow to properly monitor opioid data.

It is the second opioid settlement Schuyler County has been a part of in the past two months. In September, the county legislature authorized Getman to accept up to $121,000 from Johnson & Johnson, the parent company of Janssen Pharmaceuticals, Inc., to treat, reduce and prevent opioid use through a court settlement with the opioid maker.

The settlements stem from a 2018 lawsuit the county filed against approximately thirty defendants, including some of the biggest names in the pharmaceutical industry. The lawsuit alleged the defendants had long known that opioids were addictive and subject to abuse, particularly when used long-term for chronic non-cancer pain, and should not be used except as a last-resort. However, the lawsuit stated, the defendants spent hundreds of millions of dollars disseminating scientific materials and advertising that misrepresented the risks of opioids’ long-term use. 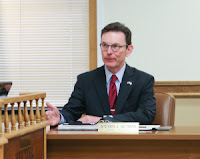 Schuyler County was one of many local governments that filed lawsuits against the manufacturers and distributors of opioid pain killers. At least 14 counties across New York sued the pharmaceutical companies for fraudulent marketing practices.

After the counties sued, in March 2019, the New York State Attorney General’s office brought its own lawsuit on behalf of the state. In July, Attorney General Letitia James announced a tentative deal with the three drug distributors that will deliver up to $1.1 billion to New York state to combat the opioid epidemic. Since then, James has begun a statewide “HealNY” tour related to highlight the settlements, with stops throughout the state, including New York City, Utica and Syracuse.

Schuyler County’s lawsuit against other defendants remains pending, Getman said, with the possibility of more settlements and additional funding to the county still to come. Along with the three distributors and Johnson & Johnson, the defendants named in the county’s lawsuit include: Purdue Pharma L.P.; Teva Pharmaceuticals USA, Inc.; Cephalon, Inc.; Endo Pharmaceuticals, Inc.; Actavis Pharma, Inc. and Insys Therapeutics, Inc.

The three companies named in Tuesday’s resolution have issued a joint statement "strongly disputing" any wrongdoing. They described the settlements as "an important step toward finalizing a broad settlement" with states, counties, and local municipalities.