As part of Schuyler County’s multi-leveled approach to tackling the opioid epidemic, Schuyler County officials are encouraging community members to participate in National Drug Take Back Day on Saturday October 27.

According to Schuyler County Attorney Steven Getman, “the initiative is aimed at helping citizens take one of the simplest steps to prevent addiction: safely disposing of unused drugs at drop-off sites around the nation.”

“Statistics indicate that new heroin users start out by misusing prescription drugs,” Getman noted, “and a majority of abused prescription drugs were obtained from family and friends, often from a home medicine cabinet.” 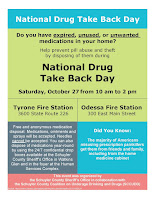 Community members can also dispose of unwanted, expired, and unused prescription drugs year-round by using the 24/7 confidential drop boxes available at the Schuyler County Sheriff’s Office in Watkins Glen or in the foyer at the Human Services Complex in Montour Falls.

Residents of other New York counties can visit clearyourcabinet.com to find out where they can safely dispose of medications this Saturday, Getman said. Disposal of unused prescriptions and over-the-counter medication at these locations is "no questions asked" and free of charge.

In addition to advancing efforts for the disposal of unused opioids, Schuyler County’s strategy to attack the national opioid epidemic includes its ongoing lawsuit against the manufacturers and distributers of prescription opiates for damages to the County. In May of this year, Getman filed a nearly 250-page Summons and Complaint for damages to the County arising out of the fraudulent and negligent marketing and distribution of opiates in the County. That case was transferred to Suffolk County Courts shortly thereafter, to join other cases brought by various New York state counties. In June, a New York State Supreme Court Judge refused to dismiss lawsuits against several large opioid manufacturers in one of the earliest decisions to come out of the cases brought by local governments over the prescription painkillers.

Recent reports indicate that opioids now kill more than 50,000 Americans a year, 10,000 more than AIDS did at the peak of that epidemic.