It isn't often that the state Conservative Party is in agreement with liberal groups, but that is the case when it comes to urging Gov. Cuomo to sign a bill that would gradually shift the funding of legal services for the poor from the localities on to the state. 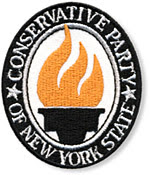 The Conservative Party... said that a requirement that the state's counties, including the five boroughs, fund legal defense programs for the poor amounts to an unfunded mandate that is choking the finances of the localities.....

Posted by Steven Getman at 6:44 AM